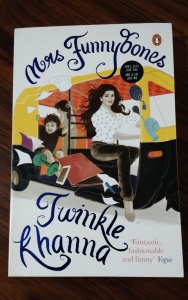 I haven’t really followed Twinkle Khanna’s column except for reading an occasional article that went viral on social media. It was the hype around, and reviews of, her debut book, Mrs.Funnybones, that made me buy it. Mrs. Funnybones is a memoir of sorts. Twinkle Khanna writes about what it’s like to be an urban, educated, upper-class, working Indian woman in the 21st century. The juxtaposition of tradition with modernity, along with the stereotypical quirky “types” we all have in our lives, is the focus of her novel.

I’ve always loved reading memoirs and autobiographies, especially those by women comedians. I have binged on Tina Fey’s, Ellen Degeneres’, Amy Poehler’s, Mindy Kaling’sand Lena Dunham’s books (granted, Mindy is the only non-white in the group). It’s an unfair comparison to make, but I kept thinking of those books while reading Twinkle’s. All these women, Twinkle included, write about being a woman and the different caps they don in their lives. They talk about being a professional woman, the ways in which patriarchy manifests itself in their lives, juggling work and home life, while also hating the oft-asked question of how they do it all. I think I drew connections with those other memoirs because I had read Twinkle’s column on menstruation and assumed that she’s a vocal feminist, as are the other women mentioned above. This was probably hasty judgment on my part.

Mrs.Funnybones is an interesting (and quick) read because you get a glimpse into the world of the rich and famous. It’s nice to read about how A-list film stars have the same problems on flights as you do, and you find yourself sympathizing with her on several occasions. The book has a mix of general observations, quips, and some philosophy. The title though, is quite misleading, as I found myself laughing out loud only for one dirty Star Trek joke. Sometimes her observations are amusing, but most of the time they are a miss. It comes off like she is trying too hard and, even when you know which way it’s headed, she takes forever to get there and the joke falls flat. She talks about her daily routine, from checking her email to taking care of her kids when they are sick. Some of these parts get boring because, while she tries to make them interesting with witticisms, they mostly sound mundane. She also appears to have launched a campaign to single-handedly bring back the use of ‘Blimey!’. In the words of Chandler Bing, it’s not “funny ha-ha”.

I also found the book to be abrupt. Even though the idea is to provide a glimpse into her life, she does it in a very haphazard and superficial manner. We get to hear her take on some of the so-called controversies she’s been involved in, particularly about the jeans unbuttoning incident, but otherwise the book is mostly a collection of random stories and lacks fluidity. She could probably have used a better editor.

If there is anything that the book taught me, it’s to not believe the reviews of books by famous friends of the author. Karan Johar says that “she is the discovery of the decade”, and it just makes you wonder how many books he has read over the past ten years. Read the book if you want to see what it’s like to be a rich and famous woman in India, while being forced to observe sexist festivals like Karvachauth. The book has a lot more potential than what’s actually put down on paper. It feels like there was more depth when it was originally written but it got taken out to sanitize it, and with it, the spunk the book could have had.

Published by The Glass Elevator

View all posts by The Glass Elevator

What We Blog About